Home Cryptocurrency For the crypto industry, supporting sanctions is an opportunity to rebrand
Cryptocurrency

Cryptocurrency, in general, has long been viewed as a tool of illicit trade. The U.S government is cracking down on cryptocurrencies and supporting sanctions are an opportunity for the industry to rebrand themselves and find new users who may not be connected with shady dealings that can easily be associated with cryptocurrency usage

The “cryptocurrency” is a type of digital currency that uses cryptography to secure and verify transactions. The crypto industry has been faced with the issue of supporting sanctions on North Korea, which has led to a rebranding opportunity for the industry. 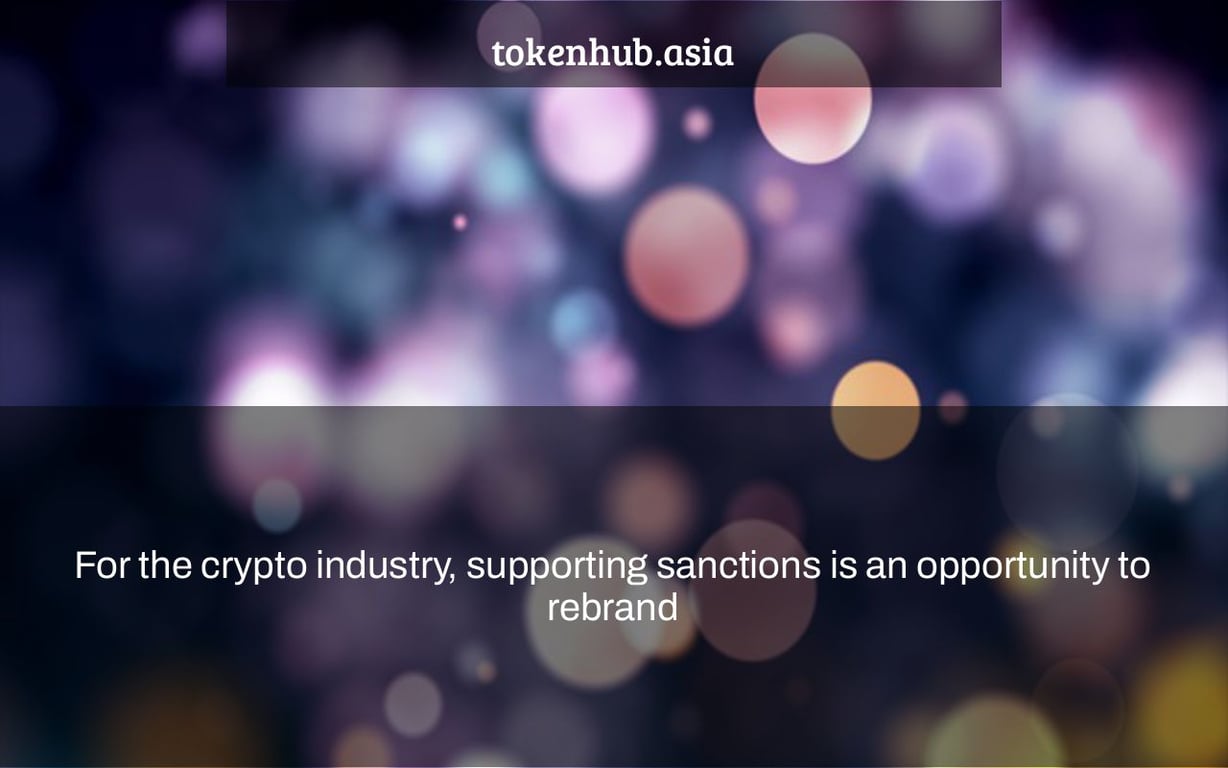 Economic sanctions were one of the first penalties imposed on Russia in response to its military invasion of Ukraine. The goal was to isolate Russia from the international financial system. Russian banks lost access to the international payments and messaging network SWIFT on March 12, and private sector payment providers like Visa, PayPal, and Mastercard followed suit. While these highly regulated and publicly watched institutions were fast to respond to the crisis, fears immediately grew that the Russian state, as well as firms and oligarchs linked to it, may use digital currency exchanges as a backdoor to avoid sanctions.

The Bank of England and the Financial Conduct Authority in the United Kingdom have ordered cryptocurrency companies to impose penalties across their platforms, and central banks and regulators throughout the globe have already joined the chorus of worry. Japan recently declared that its Foreign Exchange and Foreign Trade Act will be revised. This intends to broaden its scope to include crypto assets, requiring exchanges to determine if their customers are Russian sanction targets.

Despite this, some of the most well-known crypto exchanges are still hesitant to toe the line defined by global legislators and authorities. Binance, the world’s largest exchange, as well as Coinbase and Kraken, have all expressed sympathy for Ukrainians’ suffering, and some have banned accounts tied to sanctioned persons, but they have all refrained from exiting Russia or banning all money flows in and out of the nation.

As the CEO of Poland’s largest cryptocurrency exchange, I understand the moral ambiguity they face, torn between free-market ideals and a sense of moral obligation, but as this horrific human tragedy unfolds in Eastern Europe, we as an industry must do more to condemn the violence through access to our platforms. We at Zonda did not take the choice to leave Russia lightly, but we did so promptly, and in doing so, we voted for peace, transparency, and adherence to global regulations. Many people throughout the globe will interpret failure to do so as apathy at best or active support at worst.

Cryptocurrency exchanges are at a moral fork in the road.

The turmoil in Ukraine has exposed a schism at the core of cryptocurrency’s ideology. Digital currencies were conceived with the goal of establishing a decentralized global financial system free of financial manipulation by governments, central banks, and huge financial services companies. Yes, there are several reasons why decentralization should be investigated, including the need for better openness, accountability, and security. But we must not allow our drive for the purest kind of financial independence to take us down a dark road, believing that the rules of the nation, moral or otherwise, do not apply to us. The deliberate encouragement of illegal behavior cannot be justified by ideological support for decentralization.

As an industry, we should consider what type of world we want to build and behave in accordance with our values. The invasion of Ukraine by Russia is a clear violation of international law, and the indiscriminate killing of Ukrainian citizens in places like Mariupol is not an ethical gray area.

‘I’ve never paid with crypto before,’ says one user, explaining how digital assets may help in a battle.

The possibility of further marginalization

The present crisis necessitates a coordinated reaction from all sectors of the economy, and it is a once-in-a-lifetime opportunity for the global crypto community to band together and take coordinated action. The crypto asset business should do more to show that it is concerned about the behavior going on inside its walls. This might involve suspending Russian and Belarusian users’ accounts and denying new account requests from these countries. In fact, I feel this is our greatest shot of dispelling some of the criminal connotations that still afflict our sector.

The price of Bitcoin (BTC) has soared in recent years, with growing integration into the larger financial services sector playing a major role. Failure to read the room on this issue might jeopardize the confidence that the crypto business has established with regulators, legislators, and consumers in recent years. It would send a message to these stakeholders that it perceives itself as completely disconnected from their purposes, and even from reality.

Commercial considerations are, of course, present. Companies that convey a shared sense of purpose and moral worth to their consumers see a 14.1 percent increase in revenue and a 34.7 percent increase in annualized total shareholder return. The crypto industry is no different, and as the situation in Ukraine continues, those who failed to act quickly to assist the victims will be held accountable.

Russia has no way out of Western sanctions thanks to cryptocurrency.

Is regulation the solution?

The Financial Stability Board said in February that it will be building a worldwide regulatory framework for crypto assets, marking the first major step toward international uniformity. Simultaneously, the Securities and Exchange Commission of the United States announced a proposal to oversee alternative trading systems, allowing authorities to look at crypto platforms and even decentralized financial protocols.

There is currently no indication that new laws would demand economic penalties, but they will provide more checks and balances to the money moving via digital asset exchanges, increasing transparency and discouraging unlawful activities. However, it’s no secret that regulators are catching up to the fast speed of innovation in the crypto industry, and we shouldn’t wait for them to do the right thing. It is up to us to uphold the industry’s reputation, which we all adore.

This post makes no investment recommendations or advice. Every investing and trading choice has risk, therefore readers should do their own research before making a decision.

The author’s views, ideas, and opinions are entirely his or her own and do not necessarily reflect or represent those of Cointelegraph.

Przemysaw Kral is the CEO and a member of the board of directors of Zonda (formerly BitBay). Przemysaw was formerly BitBay’s top legal officer. He was instrumental in the strategic commercial growth of Zonda, including regulatory clearance in Canada and Estonia. Przemysaw has over 20 years of legal expertise and is a member of the British Bar Council’s Foreign Lawyers’ Association.

The “cryptocurrency news” is the opportunity for the crypto industry to rebrand. A recent article by Forbes states that supporting sanctions is a way of showing that cryptocurrencies are here to stay.