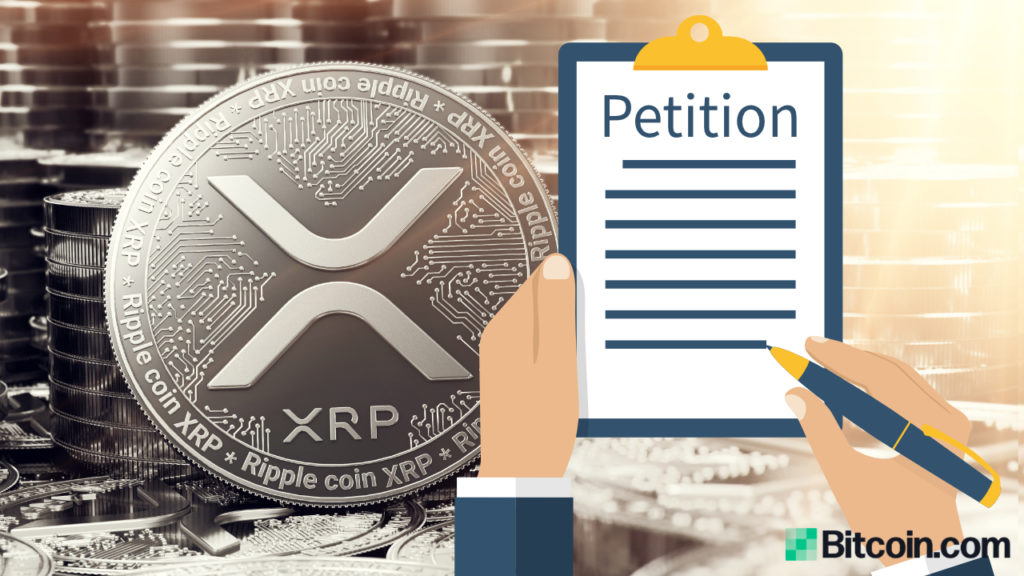 A petition has been started calling on Securities and Exchange Commission (SEC) Chairman-elect Gary Gensler to stop the prosecution of Ripple Labs and its executives over XRP tokens. The petition also calls for a thorough investigation into the issues that led to a last-minute lawsuit against Ripple brought by former Securities and Exchange Commission Chairman Jay Clayton on his last day in office.

We call on Gary Gensler, once he is confirmed as Chairman of the SEC, to closely investigate the SEC’s allegations against Ripple Labs and its co-founders, as well as the damage that the SEC’s actions have already caused to holders of the XRP digital currency, the petition reads.

Last December, the SEC filed a lawsuit against Ripple Labs, its CEO Brad Garlinghouse and co-founder Christian Larsen, alleging they sold $1.3 billion worth of XRP tokens without complying with federal securities laws.

The petition also asks Gensler to publicly commit to meeting with the owners of XRP and other digital assets to understand what investor protection really means to the SEC. Besides, he’s asking about Gensler:

End the lawsuit against Ripple and stop the Securities and Exchange Commission (SEC) from regulating crypto-currencies through lawsuits, instead of drafting these rules the right way, with input from the public and in cooperation with the U.S. Congress.

In addition, the petition calls on the SEC Inspector General to conduct a thorough investigation into the issues that led to the last-minute lawsuit against Ripple filed by former SEC Chairman Jay Clayton on his last day in office. The petition alleges that Clayton and William Hinman, the SEC’s director of corporate finance, have close ties to financial interests in the bitcoin, ether and financial technology sectors in the People’s Republic of China.

In conclusion, the application requests: Gary Gensler should stop this practice of making policy through lawsuits, sit down with the XRP holders themselves and listen to their stories. We need clear rules for everyone, not another SEC chairman picking winners and losers in a regulatory vacuum. And we call for an investigation that fully clarifies whether the SEC was protecting the interests of someone else, rather than retail investors, when the Ripple lawsuit was filed in December 2020.

Ripple recently won a lawsuit before the Securities and Exchange Commission (SEC). The court ordered the commission to produce internal documents related to its discussion of whether XRP tokens are similar to Bitcoin and Ether, which are not currently classified as securities.

What do you think of this petition to stop the SEC’s prosecution of Ripple? Let us know your comments in the section below.

No, Ripple XRP will never reach $1000. After all, its total revenue is less than $100 billion, which means it would need a market capitalization of $100 trillion to reach the $1,000 price point.

Will the XRP wave survive?

XRP Ripple might survive, but it’s still a risky bet for investors. XRP is currently the fifth largest cryptocurrency by value after Bitcoin, Ethereum, Tether and Polkadot. Ripple Labs, based in San Francisco, is the company and controlling force behind XRP tokens. XRP had a wild ride in 2020.

What happens when XRP becomes a security system?

Although the case has yet to be filed and could take years, some market experts warn that if the SEC proves in court that XRP is a security, the cryptocurrency could be left without a decent market, all else being equal. … Two smaller exchanges, CrossTower and Beaxy, have already removed the cryptocurrency from the market.